Raise the thermostat to reduce energy 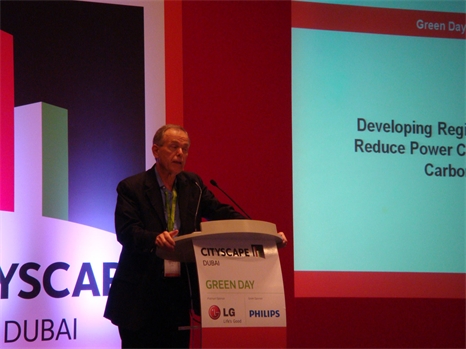 Turning up the air conditioning temperature by just a few degrees will reduce energy consumption and dramatically cut costs to businesses and homes, says Limitless, the global real estate master developer.
Air conditioning uses 40 per cent of the UAE’s energy, but raising the thermostat in offices, homes and recreational areas is a cheap, quick and easy way for everybody to play their part in environmental sustainability – and save money, according to Doug Kelbaugh, Limitless Executive Director Design and Planning.
“In China, it is against the law to set the AC lower than 26 degrees centigrade in summer,” Kelbaugh told delegates at the Cityscape Dubai 2009 Green Day conference today (Wednesday). “Here in the UAE, most thermostats are considerably lower: anything from 18 to 23 degrees, we have found. This means that it can be uncomfortably chilly in malls, shops, restaurants and some homes, with energy consumption and electricity bills unnecessarily high.
“Notching up the AC by three to five degrees saves up to 30 per cent in energy consumption and electricity bills. It is the most obvious way for everybody to be part of the environmental solution, not the problem, though this small change in behaviour must be complemented with an underlying strategy of better insulation and solar systems to make buildings even more energy-efficient.”

Kelbaugh also highlighted how changes in urban design would have a positive effect on the environment, the economy and personal wellbeing, by cutting congestion, fuel consumption, travel times and losses in human efficiency.
“A traditional street and road grid with greater connectivity would make it quicker and easier to get around by car, on foot or on bicycle. At present, it can be difficult to get from point A to point B, because a lack of intersections and places to turn left means extended trips and long loop-rounds to make a left turn,” he said.
Mixed-use communities, instead of separated land uses, are another essential way forward when it comes to environmental, economic and social sustainability, according to Kelbaugh.
“When residential is in one zone, commercial and retail in another and institutional in yet another, it encourages longer journeys – usually by car. New urbanists have shown that integrated, mixed-use developments that combine land-use in close proximity will promote shorter, fewer car trips, enable mass transit and encourage walking – the greenest, healthiest, most enjoyable and least expensive way to move around,” he said.
Recent research by Limitless shows that people in Dubai walk only half as much as medical experts advise: 5,000 steps a day instead of the recommended 10,000. This inactivity leads to increased illness and time off work, meaning lost productivity and massive loads on the healthcare industry. The study, of 625 Dubai residents, also showed that the top priority for people looking for a home is the ability to walk to work, followed by being close to a Metro station – and that they are prepared to pay more for these amenities.
Limitless is using the results of its study in the design and operation of The Galleries at Downtown Jebel Ali, the company’s mixed-use, transit-oriented community project in Dubai. There, offices and homes are a stone’s throw away from one another, and buildings are complemented with green, open spaces for walking and recreation. The Galleries will also be served by a Metro station, further encouraging walking and cutting car use.