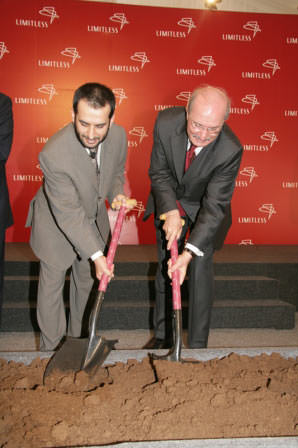 Sanaya Amman – unveiled in February under the name of Limitless Towers – will be Jordan’s tallest buildings, soaring more than 200 metres above the capital and reshaping the city’s skyline. The development, in the Abdoun district of Amman, will also be first in Jordan to meet world environmental standards, with a host of eco-friendly initiatives that will save US$2 million a year in running costs.

Speaking today (Monday) in Amman, Saeed Ahmed Saeed, CEO of Limitless, said: “At Limitless, our vision is to enhance and enrich people’s lives by delivering distinctive, sustainable developments. Sanaya Amman, our first project in Jordan, will help us turn this vision into a reality.

Sanaya Amman will include:
• more than 50 storeys, with around 500 apartments (one to four bedrooms)
• 13,000 square metres of retail and recreation space, over three floors
• 5,600 square metres of green, open space, including a landscaped park
• a 1,000 square metre outdoor communal plaza
• the world’s highest suspended swimming pool, connecting the two towers, 125 metres above Amman, and a separate sky-bridges, providing a walkway between the buildings
• wind-generated power and water recycling systems that will cut consumption by 30%
• parking for over 1,000 vehicles

Limitless has named Chicago-based Murphy/Jahn as the lead designer on Sanaya Amman, and has appointed New York-based Turner International as Project Manager. Turner’s credits include Ibn Battuta Mall in Dubai, Emirates Palace Hotel in Abu Dhabi, the Federation Complex in Moscow and the Brian Lara Cricket Academy in Trinidad and Tobago.
Sanaya Amman will be completed in three years.