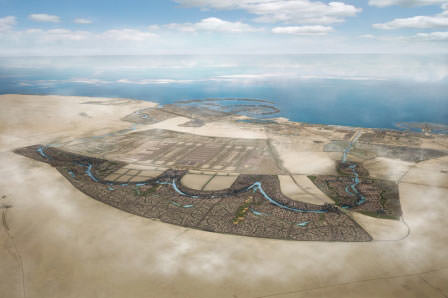 More than 1.5 million cubic metres of earth – enough to fill 600 Olympic-size swimming pools – has been excavated for the Arabian Canal, the 75km man-made waterway designed and managed by Limitless.

Pilot excavation work on the US$11 billion project has left a giant hole which, at 700 metres long, 200 metres wide and up to 45 metres deep, is big enough to hold nearly 20 A380 Airbuses or eight of the world’s largest cruise ships.

Excavated earth – amounting to one billion cubic metres – will be used to form new landscapes along the canal, including mountains up to 200 metres high, providing views of the waterway and creating new land on which to build hillside villages.

Limitless is using the world’s most sophisticated camera and video technology to monitor land changes throughout the excavation, which began in December and will continue for the next four  years. Its Goematics Information Systems team carries out weekly aerial mapping surveys from a helicopter up to 600 metres above ground, and will soon be tracking progress at ground level with new laser scanning equipment mounted on top of a 4-wheel drive vehicle.

Saeed Ahmed Saeed, CEO of Limitless, said: “The world is watching as the Arabian Canal takes shape. The project will bring life into the desert, creating a landmark destination for Dubai’s residents and visitors in the form of a navigable waterway and a balanced, sustainable canal-side city for more than 1.5 million people.”