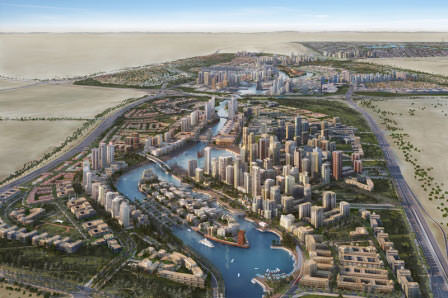 Limitless has appointed Tristar Transport & Contracting for the first phase of earthworks on its US11 billion Arabian Canal project, it was disclosed today.

The contract involves removing more than 200 million cubic metres of earth – to be re-used to form new landscapes, including valleys and hills up to 200 metres high – along a nine kilometre stretch of the waterway’s route.  Work on phase one will begin this week, with excavation and land reforming completed in three years. Abu Dhabi-based Tristar is one of 10 local and international companies who were considered for the work.

Ian Raine, Project Director, Arabian Canal, said: “Construction of our 75km Arabian Canal is a mammoth task, so we are splitting the earthworks into around 10 different packages. Tristar will work on phase one, and the tender for the second phase will be released shortly.”

Limitless is also master planning a US$50 billion, 14,000 hectare waterfront city for 2.5 million people, to be built along the 30 kilometre inland stretch of the canal. Phase one of the development covers 2,200 hectares and will accommodate 600,000 people.

The Arabian Canal will be on show at the Limitless stand (ZJ20) at Cityscape Dubai 2008.